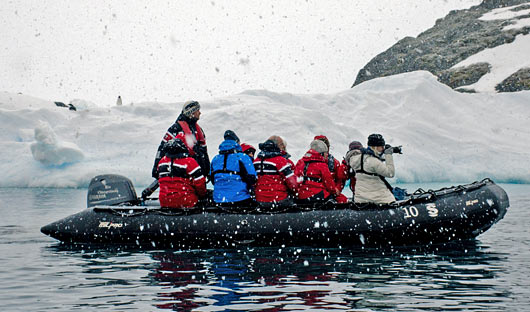 01 Nov The Many Highlights on An Antarctic Peninsula Cruise

“Good evening everyone, this is Hannah your expedition leader” The loudspeaker crackled to life. “Just wanted to inform you that there are orca’s on the starboard side of the ship… as well as portside… well, all around the ship actually. We suggest that you come out on deck and take a look.”

This announcement caused everyone I was dining with (myself included) to immediately drop their cutlery and abandon their plates piled high with superbly roasted beef with all the trimmings, and rush to the side of the ship, cameras in hand, to catch a glimpse of the whales and perhaps snap the iconic breaching photograph. 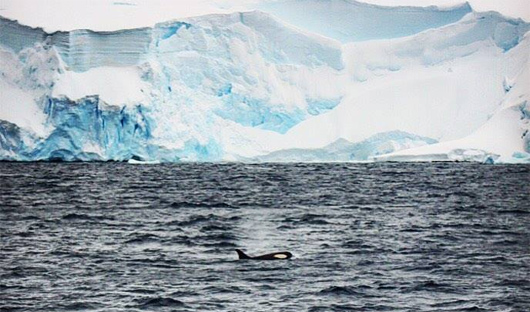 This kind of unexpected excitement was something I had quickly become accustomed to. It was my final night in Antarctica on a 9 night Antarctic Peninsula expedition cruise, on board the Island Sky. I quickly learned that taking the option to eat meals on the back upper deck of the ship instead of inside in the restaurant, was the best way to enable a hasty trip to a viewing deck when the wildlife inevitably decided to put on a show, and on this evening it happened to be a pod of 20 or so orcas. Standing with two of my fellow passengers taking in the spectacle with blankets around us was a special moment. We had not yet seen orcas on this trip and it was a beautiful farewell to Antarctica before sailing on the Drake Passage back to South America.

The expedition cruise had begun in Ushuaia, Argentina’s southernmost city a week earlier. After a night at the luxurious Arakur Hotel and a hiking and kayaking tour of Tierra del Fuego National Park, I boarded the Island Sky unsure of what to expect but certain that this expedition cruise to Antarctica would be like nothing else I had ever experienced. I was welcomed aboard by the friendly expedition team and crew for a welcome cocktail with the rest of the guests, anticipating what delights Antarctica had in store, as the ship slipped its moorings and cruised down the Beagle Channel at sun set. Here are a few of the many highlights of this cruise to Antarctica.

We completed our 540 nautical mile journey south across the Drake Passage relatively unscathed, despite the rough weather, thanks to the onboard doctor equipped with miracle sea sickness tablets. Our first sight of land in 2 days was the South Shetlands Islands , with snow-covered mountains soaring up from the sea. What I had anticipated to be my “I’m the king of the world!” moment was spent crouched behind the plastic perspex on the top deck of the ship, taking cover from the incredibly strong winds as the ship approached the mammoth mountains.

Due to strong winds, we explored the South Shetland Islands from the ship. Because of the Island Sky’s relatively small size (maximum of 114 guests onboard) the experienced captain was able to circumnavigating a mile-wide tabular iceberg towering above the ship, as well as navigate the narrow entrance into the caldera of Deception Island. From here we were able to sail into Whalers Bay to view the dilapidated whaling station. 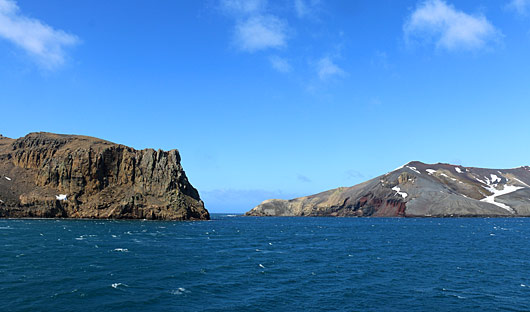 The entrance to the caldera at Deception Island 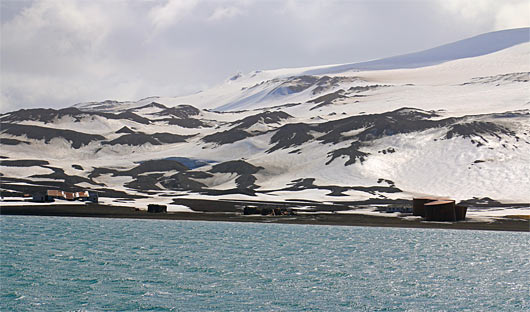 We pressed on to the Antarctic Peninsula in the afternoon, as our expedition leader Hannah decided this was our best bet to find calmer weather and be able to get off the ship and go on a zodiac cruise. She was right.

After a wonderful dinner I found myself on a Zodiac with 9 other excited passengers and an expedition team member, cruising through bergy bits (small icebergs) around Cierva Cove, Antarctica. Huge snowflakes were falling that were so light they managed to hold their snowflake shape as I caught them in my glove. It felt like a scene from the enchanted Narnia. 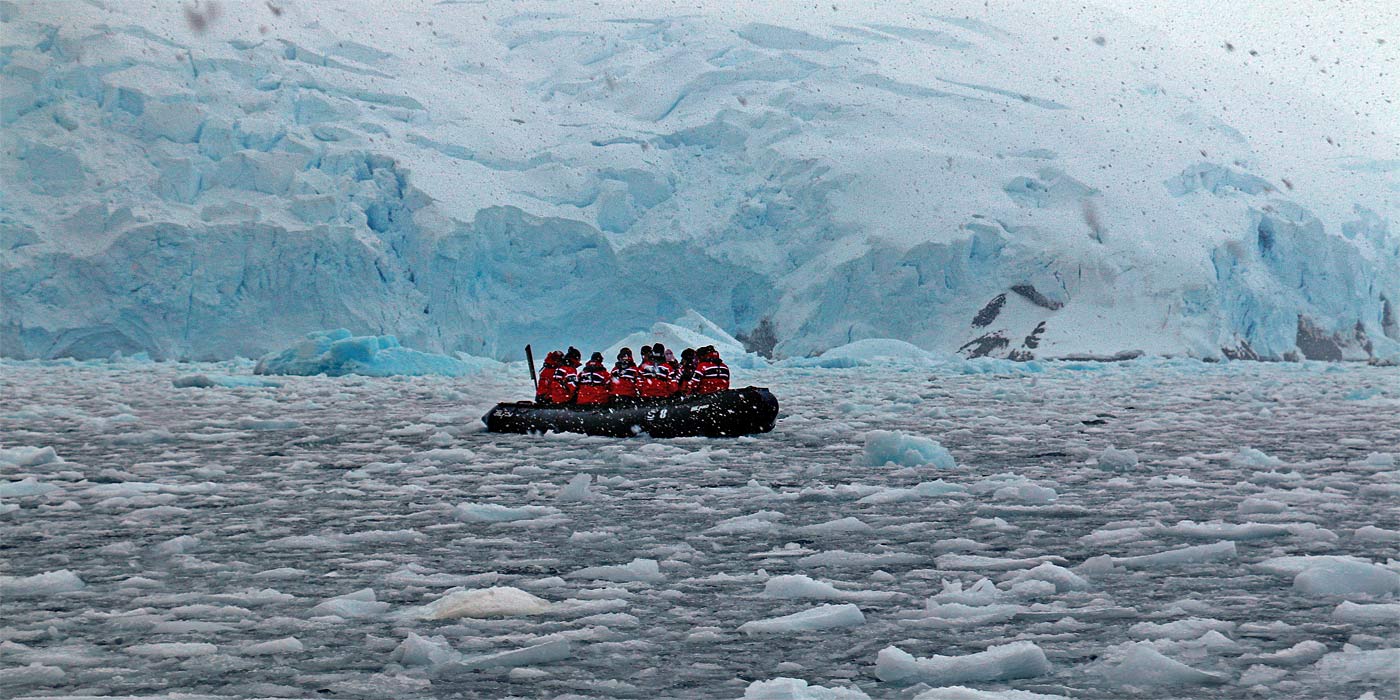 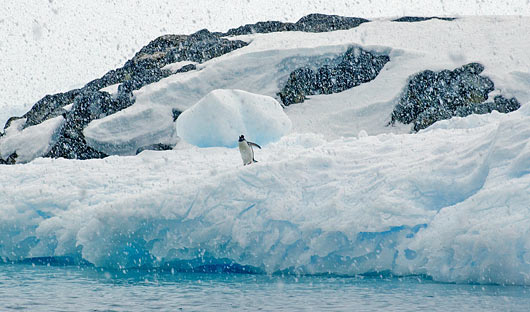 The next morning we were bound for Cuverville Island, which was set to impress everyone. The sun came out to reveal the pristine landscape, covered in a fresh blanket of snow. The only disturbances in this winter wonderland were the footprints from the penguins (penguin highways as the expedition team called them). You could feel the electric current of excitement spreading through the ship as we were called to board the Zodiacs and head to the famed shores of Antarctica. For many, they would be setting foot on their seventh continent and the anticipation was making everyone giddy with excitement.

The crew helped us board the Zodiacs with care and precision and we were soon off, weaving past icebergs and porpoising penguins. We pulled up to the rocky shore and disembarked with the help of the expedition team. “We’re here” my fellow passenger whispered in disbelief, unable to completely comprehend that we had finally made it to Antarctica. Onshore, Gentoo penguins were everywhere, busying themselves with fishing, bathing in the shallow water and collecting stones for the nests they were making with their mates. The rookeries were teeming with activity and noise. 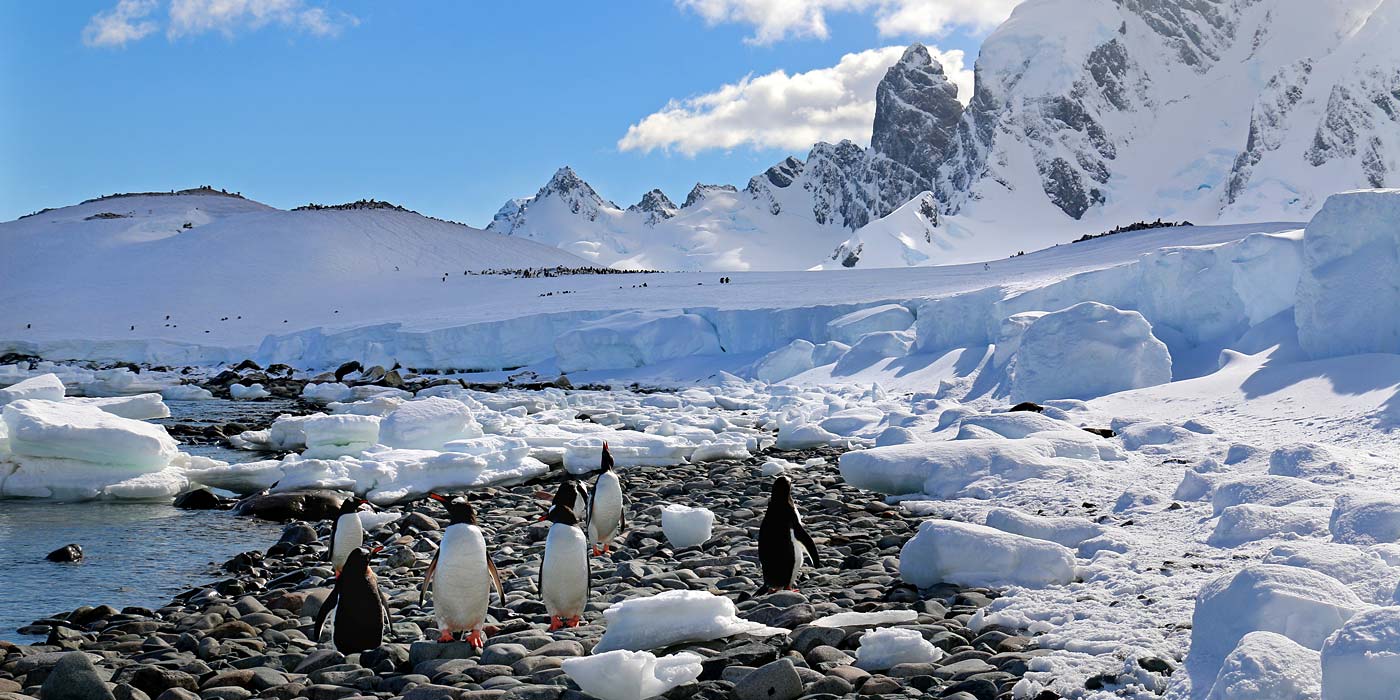 We saw a baby elephant seal preparing to head off to sea on its own as well as leopard seals sunbathing on an iceberg. A few of us who wanted to stretch our legs walked with an expedition team member to the top of the hill to soak up the breathtaking views in the company of a few skuas. The sun was shining, the sky was blue and there was not a breath of wind. We were incredibly lucky to have had such favourable weather. 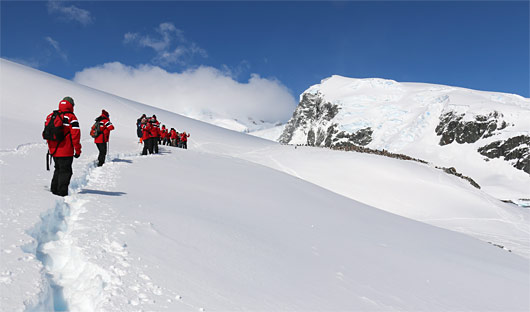 Setting off on a hike at Cuverville Island 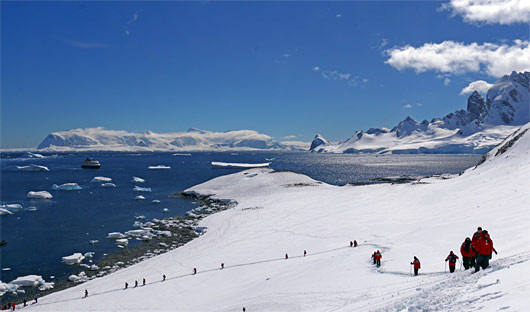 Views from the Hike at Cuverville Island

Once arriving at Paradise Harbour we set off in the Zodiacs to land at the site of the Argentine base, Brown Station. As it is a relatively small landing site half of the 114 guests went ashore at a time while the other half enjoyed a Zodiac cruise around the bay. The weather had turned so everyone was dressed in their thermal gear and waterproofs as it was very cold and windy, proving how fickle the weather can be in Antarctica. On shore we hiked to the top of the hill to marvel at a view of the area before returning to inspect the research station, which was unoccupied as researchers commence later in the summer. Following this, I boarded a Zodiac and cruised among large icebergs sculptured by the sea and past cliffs with nesting cape petrels. On our way back to the ship a curious humpback whale popped up close to us, curious as to who we were. Upon arrival back on board we were served hot chocolate and given a hot face cloth to warm up. 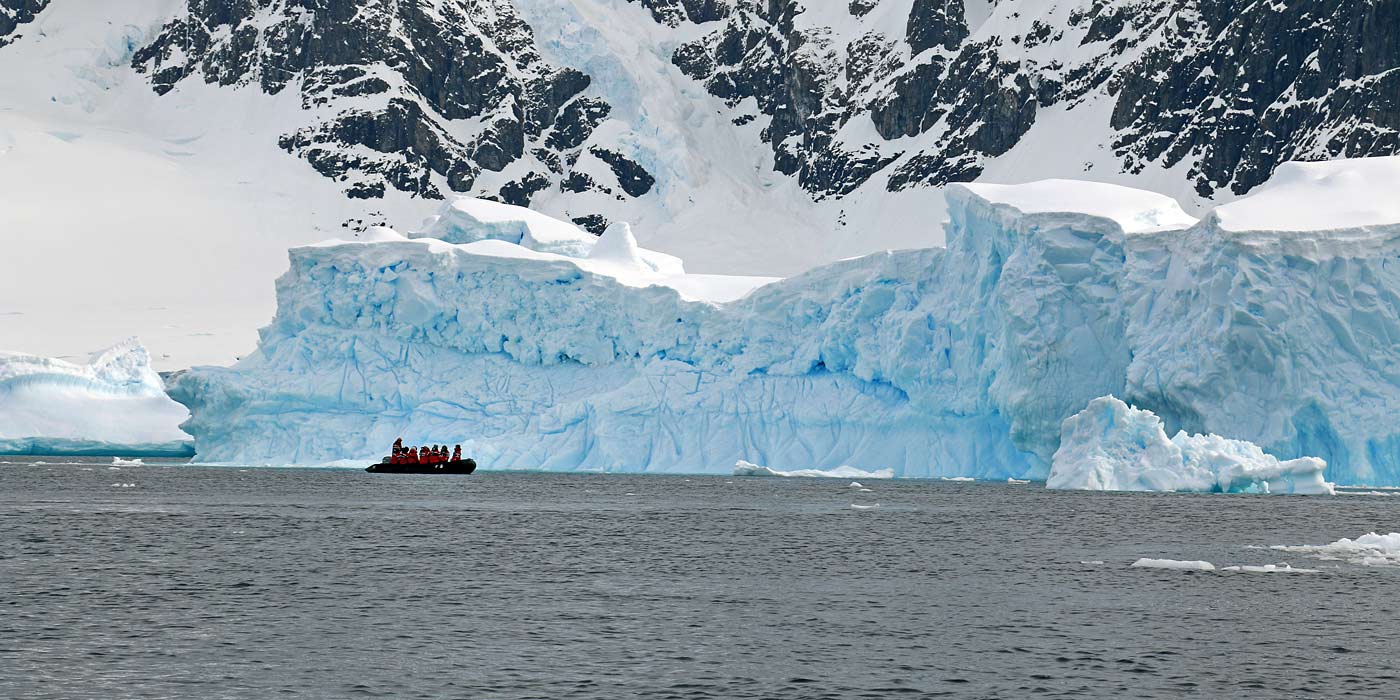 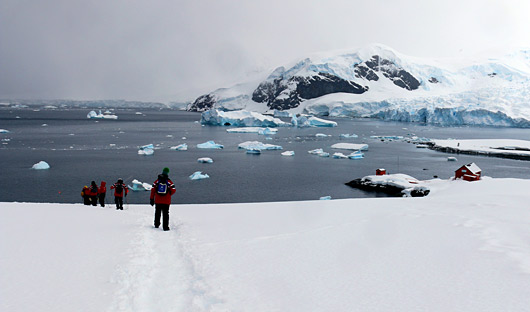 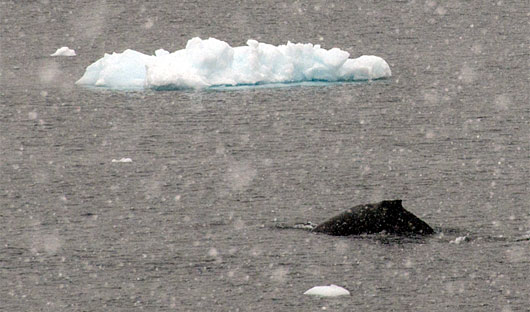 Port Lockroy was an interesting stop – boasting the largest gift shop in Antarctica and the most southerly operational post office. The port was originally a British research station between 1944 until 1962. In 1996 the base was restored as a living museum operated by the United Kingdom Antarctic Heritage Trust, giving visitors a taste of what conditions were like during this time. The trust also conducts research on the behaviour of the penguins in this area. 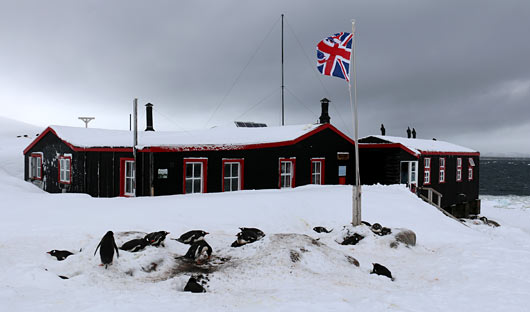 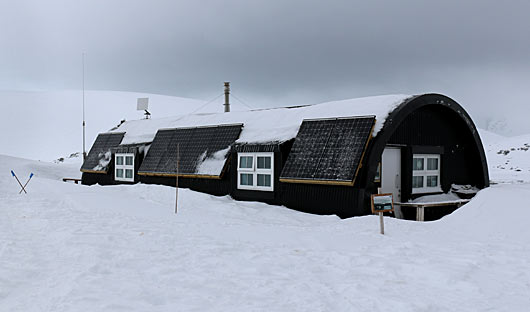 Before heading ashore, two of the scientists stationed at Port Lockroy for the summer came aboard the Island Sky to share information about their research on the penguin colonies and what it is like living in this remote place with only four people for company along with the daily visits from expedition cruise ships. We then set off in the Zodiacs to visit the famous museum, gift shop and post office. We were careful not to disturb the penguins as we disembarked the Zodiacs and quickly made our way to the small establishment. Inside the museum was like stepping back in time. Unopened cans of food with packaging from the 1950’s, an old fashioned stove, radio equipment and pictures of the Queen in her youth were the reminders of a bygone era. 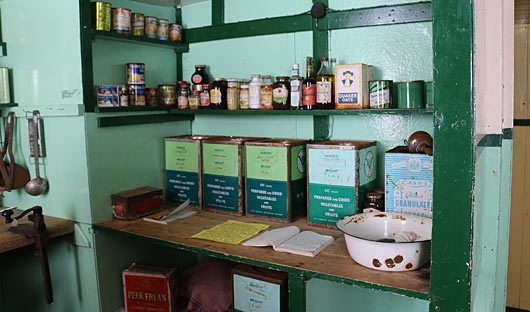 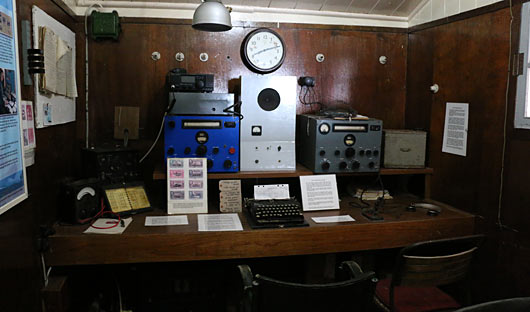 The gift shop was surprisingly well equipped with souvenirs to take home for loved ones. It became somewhat of a frenzy as the store was quite small and we hadn’t seen a shop since leaving Ushuaia. Some passengers went on a shopping spree returning to the ship with t-shirts, penguin teddies, tea towels. posters and mugs, along with a reasonable credit card bill! This is where we could send post cards to friends and family with the expected arrival date of 8-10 months later. 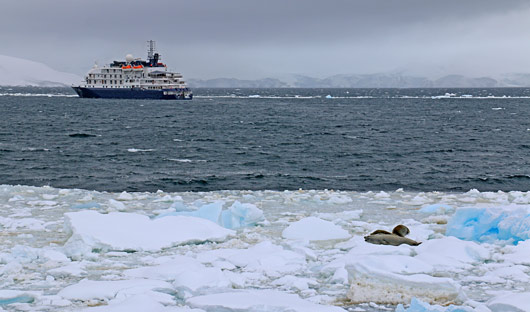 For me and many of the other guests Neko Harbour was the highlight of the trip. As we sailed into the bay the mountains towered around the ship and the water reflected their grandeur. Icebergs brushed against the bow as we glided across the glass-like water. We arrived ashore as Gentoo penguins busied themselves in the water and around the rookeries. The soft light casting through the few clouds created an ethereal scene. Now and then we would hear a crack and find a new iceberg had been released to the bay from the enormous glacier soaring above. 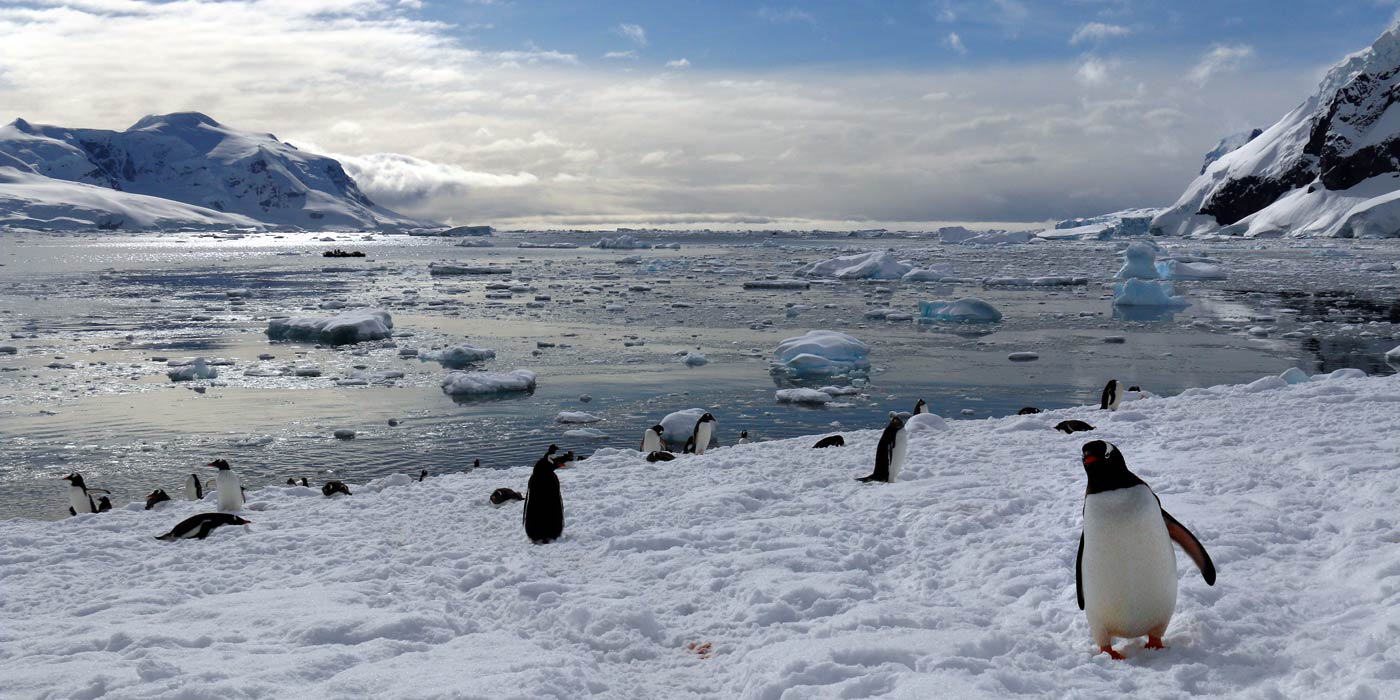 For those who could tear themselves away from the curious behaviour of the Gentoo penguins, there was the option to hike up the side of the mountain for approx. 1 km to gain excellent views of the glacier and the harbour. Although the walk up was steep, it was well worth it. To see the entire bay reflecting in the gorgeous light had photographers thrilled. On the walk back down we could deviate from the original path to see the glacier up close from the base as well as more penguins. When it was eventually time to leave this magical place and return to the ship we were surprised with a barbeque on the deck so we could continue to soak up the harbours beauty. I imagine it will be next to impossible to enjoy a meal with such spectacular views again. 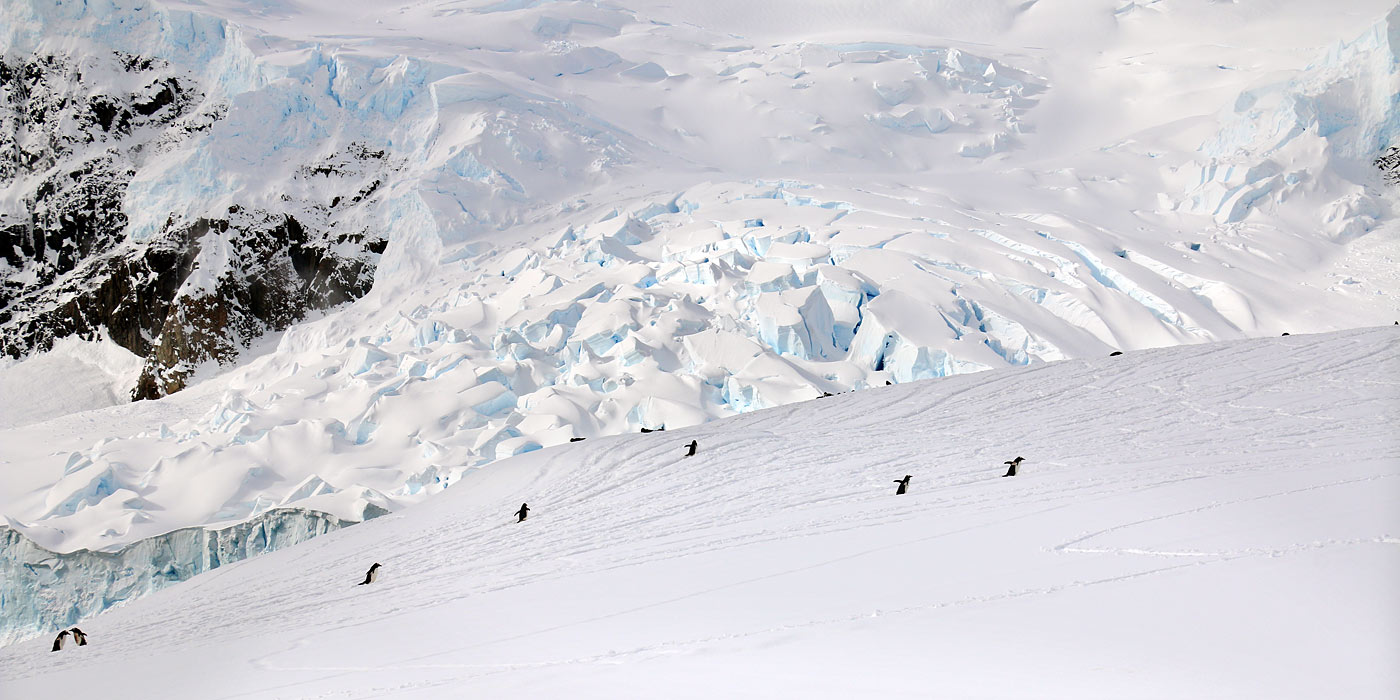 When Considering Your Antarctica Cruise

Each polar cruise has its own highlights and as the weather varies the schedule may change. The expedition team on the Island Sky were exceptional at handling different weather challenges as well as providing an excellent onboard experience filled with interesting lectures, citizen science activities and enjoyable social events such as trivia. Contact our team of experts to find the perfect itinerary and ship for your Antarctic adventure. Call 1300 668 112 or email contact@antarcticatravelcentre.com.au.